Cambridge Ghost Stories That Will Send Shivers Down Your Spine… 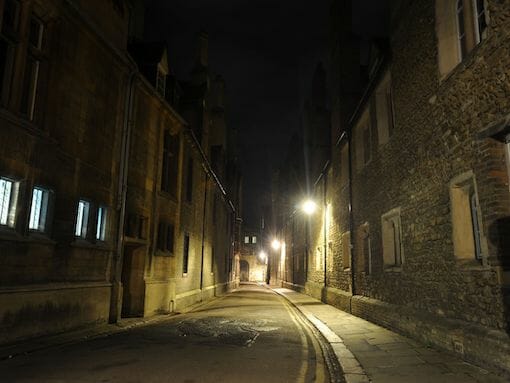 With parts of Cambridge being erected in 1020, it really is no surprise that this historical location has plenty of ghoulish tales attached to it. There’s nothing like a ghost story to bring a historical area to life, is there? Whether you’re moving to the area, or visiting, you won’t believe some of the spooky goings on in this area….

Read on to find out about Cambridge ghost stories that will truly send shivers down your spine:

Arbury Road is said to be home to a large, ghostly black dog, otherwise known as a shuck. The shuck is said to wander the countryside of East Anglia, terrifying all who come across it. If you happen to wander through the area and spot the shuck, you are apparently going to get bad luck after the sighting, so fingers crossed this is one ghostly ghoul you never meet.

Apparently, a certain address on Newmarket Road is spooked by all manner of ghostly goings on. Freezing temperatures, moaning and moving objects have all been reported in one property, which is often rented by students.

According to reports, various loud stamping noises have annoyed, and scared those in the building over the years. Rumour says it is a suicide victim who haunts the place, although a ghost has only ever been heard and not seen.

Chesterton Road is home to a ghost that once appeared to a person who was standing outside a business building waiting for a friend. They are said to have seen a policeman dressed in full uniform from the 1940’s. Most spookily, the person also states that the apparition floated above them during their experience. Eek!

Christs College contains the famous Mulberry Tree Garden, which is visited often throughout the day, without any spookiness at all. At night though, things can change, especially if there is a full moon. According to legend, when the moon is complete, and the clocks strike 12 midnight, you could see a ghost who appears to be old, and wearing an unmistakable beaver hat.

So the legend goes, he walks the garden looking mournful and guilty because of what he has done. The tale says that he is called Mr Round, and he was potentially responsible for the death of his lover Lady Mary Clifford, and a man she may have found herself straying with, Philip Collier. The two were found having drowned in the college pool, with accidental death being highly unlikely.

A famous apparition of Girton College is the Grey Lady, who hasn’t been seen since the end of the 19th century. Despite the lack of recent sightings, she made quite the impact during her time of hauntings. She appeared on a specific staircase as a grey young woman, who is reported to be Miss Taylor, a student who was excited to attend the college, but died before she could.

Roarsome Statues At The Fitzwilliam Museum

The Fitzwilliam Museum is home to two gorgeous stone lions that sit looking majestic and beautiful, adding to the overall magnificence of the building. What you might find surprising though, is walking past at night and seeing these stone lions walking around. Witnesses say they see the lions wandering around, and sipping from nearby puddles before wandering back towards the building and vanishing.

Caretakers and other grounds keepers at the site say they saw a huge black cat on the grounds in the 90’s. It hasn’t been seen since, but it is said to have been more of a beast, than any known real animal.

Abbey House is consistently associated with new ghost reports. Farm animals, forest animals, chain rattling, moving items, ghost butlers and even a ghost bride have all been spotted by visitors. The most regular ghost sighting though, is a 60 year old lady in grey who has been on the receiving end of an exorcism, and still continues to be seen.

Oliver Cromwell died in 1658 and after he passed, King Charles the second had him dug up, ‘executed’ and his head removed and displayed for people to see. Eventually, the head apparently simply disappeared and exchanged hands before it was buried at Sidney Sussex College. Many have disputed whether or not the body exhumed was actually Oliver Cromwell’s at all.

Whatever the true story behind Oliver Cromwell’s body and post-death execution, many visitors have said they have seen a floating head/ headless body wandering around Sidney Sussex College.

Ghost Pilots At The Airport

Cambridge airport has a rich history because it was built prior to the Second World War. Planes that were/ are served by the airport have been both domestic, business and military over time.

When it comes to ghosts, the most common visions are spooky pilots in RAF uniforms not only seen making their way through the airport, but heard whistling as well. Some people even say they hear their footsteps as they walk past.

Dr Butts is one of the most famous ghosts in Cambridge because there have been such regular sightings of him at Corpus Christi College. Appearances have been noted since 1904, but his story begins much earlier. He was said to have been found, deceased, hung by his clothing in his room after being known to have regular depressive episodes.

As if Dr Butts wasn’t enough of a presence at Corpus Christi, there are even more ghosts to be spooked by in this location in Cambridge. James Betts is regularly seen, having said to have met his end by suffocating hiding in kitchen cupboards during a game of hide and seek. Grief-stricken, his beloved girlfriend Elizabeth Spencer ended her life through suicide, jumping off the roof of the college soon after she found out about James’s death.

When you are wandering through the historical sites, you might want to keep your eyes and ears open for spooky locals. Whether there is any truth to the stories or not, the legends certainly add a different atmosphere to this beautiful city.