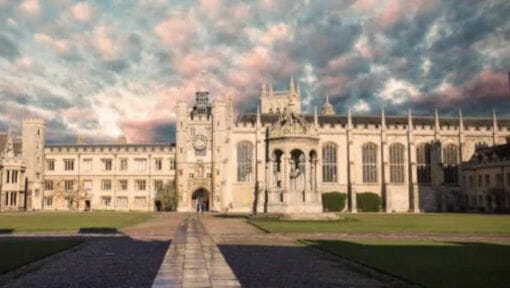 Think you know all there is to know about the beautiful city of Cambridge? Think again… Here are some facts about Cambridge you may not know.

If you think you know all there is to know about the stunning city of Cambridge, you might want to think again. There’s a lot of interesting lesser known facts about this amazing place, including the following 13 tidbits:

1.   The Double Helix Was Announced In A Pub

The double helix was discovered by a team studying how DNA is structured at Cambridge in 1953. The news was announced officially soon after the discovery was made. Interestingly though, the team, including Francis Crick, first announced the news in The Eagle, a Cambridge pub, proclaiming they has discovered the secret of life to everyone inside.

It is a fact that Isaac Newton studied at Cambridge University, eventually publishing his theory of gravity in Cambridge itself. This is kudos enough for the university considering the fact that Isaac went on to change the way we know the world, and the way that it works. As if that wasn’t enough, a cool legend that pairs with this fact is that they say this is where the apple fell on his head, seeding his interest in finding out why things fall down to earth.

The very first ‘officially recorded’ game of football was played in Cambridge in 1848. It used something called the ‘Cambridge Rules’ which formed the basis of the official Football Association game rules.

Lord Byron the Poet was a student at Cambridge in the 1800’s. He desperately wanted the company of a dog as he studied, but dogs were not allowed, which upset him greatly. To get around the issue, he decided to be creative to get around the rules and bought a bear as his pet instead. He had a reputation for being a touch bonkers so this behaviour would not have been a surprise to anybody who knew him. Undoubtedly though, the college was surprised to find a student had done this!

5.   Cambridge Features In Many Films

You don’t need a degree to know that Cambridge University is absolutely gorgeous. What you might not know, though, is that Cambridge features in some pretty well known movies. The Theory Of Everything, Pirates of the Caribbean, Elizabeth, Chariots Of Fire and Sylvia, to name a few.

Cambridge is an incredible city these days, with bundles of great cheap self storage, shops, restaurants, pubs and more. In the past though, it was predominantly agricultural and that history still shows itself in some of the most incredible ways. One way is the Midsummer Common area of the city, which is famous for the cattle that graze there. The cows are so well known, they have their very own Twitter account.

Cambridge is certainly growing in all areas. It is an incredibly successful city, especially when it comes to the tech hub side of things. The city is estimated to hold double the tech turnover of the average UK city of the entire UK gaming industry, some of which are global corporations and business enterprises. Di you know one of the most interesting facts about Cambridge is the range of tech names that are based ihere, including: Darktrace, FiveAI, Arm, Kymab and Ieso Digital Health.

The city of Cambridge clearly has a lot of history and interesting buildings. What you may not realise is that the city actually dates all the way back to the Bronze Age! It wasn’t named Cambridge then, but there was a settlement in that area all that time ago.

9.   Cambridge University Was Founded Way Back Too!

Unsurprisingly, Cambridge University has well over 100 libraries and the main library actually has over seven million books. This is partly because it is a legal deposit library so it gets a copy of each and every book published within the UK. There are also some incredible treasures within its many shelves, including much of Charles Darwin’s personal correspondence books.

One of the more gruesome facts about Cambridge you probably didn’t expect is that there is apparently, a skull somewhere on the grounds of Sidney Sussex College. Not just any skull either, but Oliver Cromwell’s head. He was Lord Protector of England in the mid 1600’s and died naturally before being buried in Westminster Abbey. Kind Charles the second then asked that his body be exhumed and the head removed, to make a point. The head was then buried separately by students in the 1960’s in a location that is now the stuff of legends.

There is a famous statue of Henry VIII at Trinity College that dates back to the beginning of 1600. The statue shows him holding a sceptre and orb although… that is more what it is meant to show. What he actually holds instead of a sceptre is a chair leg. It is thought that a famous group called the Cambridge Night Climbers stole the sceptre as they ran amuck causing mischief in the city. A maintenance worker at the college then decided to replace the sword with a chair leg, which remains.

The above facts about Cambridge are fun and surprising, adding to the incredible character of the amazing city.

If you’re interested in visiting Cambridge, or you’re moving there soon, why not enjoy a visit and learn even more about this incredibly desirable location.