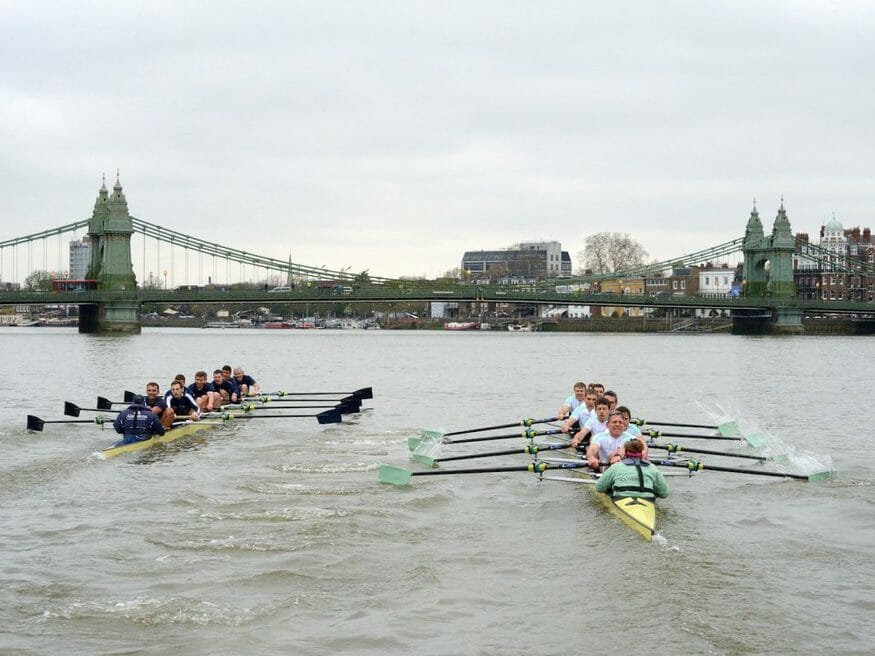 Are you interested in knowing more about the Oxford and Cambridge Boat Races? This article has lots of interesting information and a historical overview of the event.

You don’t need to live in Cambridgeshire or Oxfordshire to know about the famous boat race that takes place between Oxford & Cambridge. It occurs every year and is very much an occasion that is celebrated, so much so that many people visit the area just to watch the events unfold.

If you are considering moving to Cambridge, use Cambridge self storage, or you like to travel to Cambridgeshire on weekends away, it’s a great idea to learn more about this historical event. The more you know about its history, the more exciting the event is when you get to see it in person.

Let’s explore the boat races history, and some interesting facts about it too:

What Is The Boat Race?

The Boat Race refers to a rowing boat race between Oxford and Cambridge Universities. It takes place annually and is usually held along the River Thames in London, England. The stretch most often used is called ‘The Championship Course’ which is a four mile stretch between Putney and Mortlake.

The race is often broadcast on television, but many people from Cambridgeshire and Oxfordshire flock to see it take place, as well as spectators from around the country, and even the world.

Although there are races between men and between women in the modern boat race event, it started as a men only event.

The very first race took place in 1829 because a Cambridge student called Charles Merivale challenged his friend and Oxford student Charles Wordsworth to a race. During that race the Cambridge team wore pink sashes, and the Oxford team wore dark blue tops, later to be officially the ‘Oxford Blue’ colour representing their team. Oxford won that first race and the second race didn’t take place again until 1836. This is when Cambridge officially adopted a pale blue as their official colour.

The race took place along the Thames and there was another delay in it occurring again because of a dispute over location preference.

Since 1856, however, it has been held annually apart from the years during World War One, World War Two and 2020 because of the Covid-19 pandemic.

As it stands there have been 85 Cambridge wins and 80 Oxford wins so far, with one dead heat in 1877.

The first women’s event was held in 1927 and was held as a completely separate event from the main boat race until 2015. Until 2015, the women’s event had less sponsorship, support and general coverage. Since newer sponsorships the two races are more equal and have been held at the same time since the 2015 changes. 2016 also opened up access for the women’s team to training facilities of the same standard to the men’s Boat Race team.

Throughout the years of the boat race being held there have been significant and notable events on certain years.

In 1877 there was a dead heat declared by the judge John Phelps who was known for having a problem with alcohol, and for being untrustworthy with his judgement. This is the only dead heat recorded throughout the boat race history.

In 1912 the weather was very bad but the race went ahead anyway. Unfortunately, both Oxford and Cambridgeshire racing teams suffered their boats sinking and the race had to be abandoned. Other sinkings occurred in 1859, 1925, 1951, 1978 and 1984. There have also been some near-sinkings that have happened where the boat managed to recover enough to complete the race.

During both World War One and Two the race was not held because the men who would have taken place in it went to war.

In 1959 and 1987 there were attempted mutinities amongst the Oxford team. The 1959 attempt failed and the Oxford team won. The 1987 mutiny was much more complex and interesting it was turned into a book called ‘True Blue: The Oxford Boat Race Mutiny’ by Patrick Robinson which was so good, it ended up being turned into a film. You can take a look at the trailer for the film here.

The 2012 protest occurred when a single protester called Trenton Oldfield went into the water and swam between the boats during the race. He did so to draw attention to his feelings about elitism in British society, spending cuts that were occurring at the time and further topical issues of that time.

The boat race had to be cancelled in 2020 because of the Covid-19 pandemic. Along with many other sports events in the UK and across the world, the event couldn’t go ahead because it was early on in the pandemic and events mixing people together in close proximity could not go ahead. In addition, there wouldn’t have been people allowed to attend either because of the restrictions.

The boat race of 2021 had to be moved to a shorter course at Ely in Cambridgeshire because there were concerns about Hammersmith Bridge and its safety.

Will You Go To See The Boat Race Next Year?

Seeing this incredibly famous and historic boat race take place is definitely a must-do for anybody from Cambridgeshire, Oxfordshire or anyone who loves a really great sporting event. If you have moved to Cambridgeshire recently and your house, self storage in Cambridge and work is all setup and you’re settled, why not plan to go and see The Boat Race?

It’s not confirmed where it will be in the future, but the chances are you can get to one of the most commonly used courses easily from your home in Cambridgeshire. The best thing to do is get to your viewing spot nice and early to make sure you can see everything. Lots of pubs and eateries also broadcast the race on the big screen if you want to enjoy watching it with refreshments easily within reach.